The History of Nunapitchuk 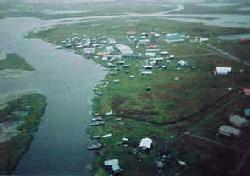 Nunapitchuk is located on the both banks of the Johnson River, 22 miles northwest of Bethel in the Yukon-Kuskokwim Delta. It lies at approximately 60° 53' N Latitude, 162° 29' W Longitude (Sec. 05, T009N, R074W, Seward Meridian). The community is located in the Bethel Recording District. The area encompasses 8 sq. miles of land and 0 sq. miles of water.

It is an Eskimo village first listed in the 1939 U.S. Census with a population of 121. The community was incorporated as a second class city in 1969. During the 1970 U.S. Census, Nunapitchuk and the nearby villages of Atmautluak and Kasigluk were enumerated as "Akolmiut."