The History of Nikolski 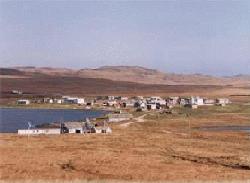 Nikolski is located on Nikolski Bay, off the southwest end of Umnak Island, one of the Fox Islands. It lies 116 air miles west of Unalaska, and 900 air miles from Anchorage. It lies at approximately 52° 56' N Latitude, 168° 51' W Longitude (Sec. 04, T084S, R136W, Seward Meridian). The community is located in the Aleutian Islands Recording District. The area encompasses 88 sq. miles of land and 116 sq. miles of water.

Nikolski is reputed by some to be the oldest continuously-occupied community in the world. Archaeological evidence from Ananiuliak Island, on the north side of Nikolski Bay, dates as far back as 8,500 years ago. The Chaluka archaeological site, in the village of Nikolski, indicates 4,000 years of virtually continuous occupation. People were living in Nikloski before the pyramids were built, the Mayan calendar was invented, or the Chinese language was written. In 1834, it was the site of sea otter hunting, and was recorded by the Russians as "Recheshnoe," which means "river." In 1920, a boom in fox farming occurred here. The Aleuts became affluent enough to purchase a relatively large boat, the "Umnak Native," which was wrecked in 1933. A sheep ranch was established in 1926 as part of the Aleutian Livestock Company.

In June 1942, when the Japanese attacked Unalaska and seized Attu and Kiska, residents were evacuated to the Ketchikan area. Locals were allowed to return in 1944, but the exposure to the outside world brought about many changes in the traditional lifestyle and community attitudes. In the 1950s, the Air Force constructed a White Alice radar communication site here, which provided some jobs. It was abandoned in late 1977.