The History of Naknek 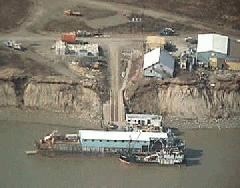 Naknek is located on the north bank of the Naknek River, at the northeastern end of Bristol Bay. It is 297 miles southwest of Anchorage. It lies at approximately 58° 43' N Latitude, 157° 00' W Longitude (Sec. 03, T017S, R047W, Seward Meridian). The community is located in the Kvichak Recording District. The area encompasses 72 sq. miles of land and 17 sq. miles of water.

This region was first settled over 6,000 years ago by Yup'ik Eskimos and Athabascan Indians. In 1821, the original Eskimo village of "Naugeik" was noted by Capt. Lt. Vasiliev. By 1880, the village was called Kinuyak. It was later spelled Naknek by the Russian Navy. The Russians built a fort near the village and fur trappers inhabited the area for some time prior to the U.S. purchase of Alaska.

The first salmon cannery opened on the Naknek River in 1890. By 1900, there were approximately 12 canneries in Bristol Bay. The Homestead Act enabled canneries to acquire land for their plants, and also made land available to other institutions and individuals. The parcel owned by the Russian Orthodox Church on the north bank of the River was the first land recorded in Naknek. Squatters built shelters on the church property and were eventually sold lots in what became the center of Naknek. A post office was established in 1907. Naknek has developed over the years as a major fishery center.