The History of Klukwan 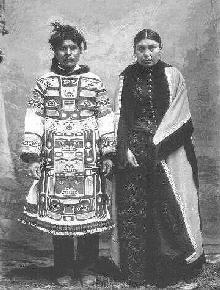 Klukwan is located on the bank of the Chilkat River, about 22 miles north of Haines, off the Haines Highway. It lies at approximately 59° 24' N Latitude, 135° 53' W Longitude (Sec. 33, T028S, R056E, Copper River Meridian). The community is located in the Haines Recording District. The area encompasses 2 sq. miles of land and 0 sq. miles of water.

In 1880, the U.S. Navy reported the name of the village as "Chilcat of Klukquan," which is said to mean "the old town." The Chilkat controlled the trails to trade with Interior Indians. At that time, the Chilkat numbered approximately 1,000 among five area villages. In 1881, the Willard mission and school was constructed in Haines. Four canneries were built in the area by the turn of the century. In the late 1890s, the Dalton Trail from Chilkat Inlet to Whitehorse offered an easier route for wagons and cattle to the Klondike gold fields. However, the Chilkoot Trail out of Skagway was used by most prospectors. By the early 1900s, Klukwan was the last remaining Chilkat village in the area.