The History of Homer 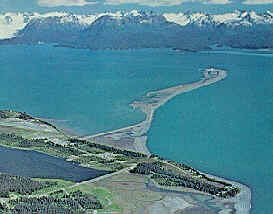 Homer is located on the north shore of Kachemak Bay on the southwestern Kenai Peninsula. The Homer Spit, a 4.5-mile long bar of gravel, extends from the Homer shoreline. It is 227 road miles south of Anchorage, at the southern-most point of the Sterling Highway. It lies at approximately 59° 38' N Latitude, 151° 33' W Longitude (Sec. 19, T006S, R013W, Seward Meridian). The community is located in the Homer Recording District. The area encompasses 11 sq. miles of land and 16 sq. miles of water.

The Homer area has been homes to Kenaitze Indians for thousands of years. In 1895 the U.S. Geological Survey arrived to study coal and gold resources. Prospectors bound for Hope and Sunrise disembarked at the Homer Spit. The community was named for Homer Pennock, a gold mining company promoter, who arrived in 1896 and built living quarters for his crew of 50 on the Spit. Their plans were to mine the beach sands along Cook Inlet, from Homer to Ninilchik. The Homer post office opened shortly thereafter. In 1899, Cook Inlet Coal Fields Company built a town and dock on the Spit, a coal mine at Homer's Bluff Point, and a 7-mile-long railroad which carried the coal to the end of Homer Spit. Various coal mining operations continued until World War I, and settlers continued to trickle into the area, some to homestead in the 1930s and 40s, other to work in the canneries built to process Cook Inlet fish. Coal provided fuel for homes, and there is still an estimated 400 million tons of coal deposits in the vicinity of Homer. After then Good Friday earthquake in 1964, the Homer Spit sunk approximately 4 to 6 feet, and several buildings had to be relocated.